Entertainment Weekly just released some new cast shots from Season 3 of Teen Wolf. I’ve added the one photo of Stiles to the gallery!

“Stiles” Stilinski (Dylan O’Brien)
What to expect in season 3:“We’re going to see Stiles basically branch out and move on from his crush with Lydia,” says Davis. “He’s decided it’s over and he’s going to be a man now and move on and not pine after a girl who will barely give him the time of day.” Good for him! Except…”let’s just say that romance isn’t easy for him this season,” teases Davis. 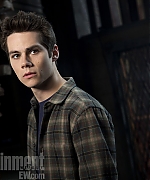