Up Close and Personal with Dylan O’Brien: The ‘Maze Runner’ Star Talks Movies, Making It, and More 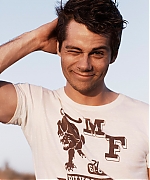 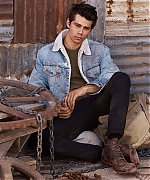 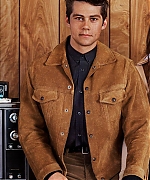 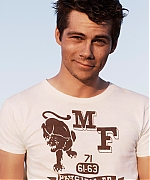 Dylan O’Brien’s big brown eyes widen as he looks up at a massive concrete cross section of the maze, a living puzzle he’s set to conquer. A large camera zooms in on his face, coated in a thin layer of dirt, as he adjusts the collar of his blue shirt. The now 22-year-old is filming The Maze Runner—Wes Ball’s adventure thriller based on James Dashner’s best-selling YA book of the same name—on location in Baton Rouge, Louisiana. From the highway you’d never know that inside this colossal warehouse (a former Sam’s Club), fall’s hottest flick is deep in production.

“We have eight weeks and 30 million dollars,” Dylan says to me, catching his breath between takes, nodding at the massive labyrinth set he just came from. We’re sitting in director’s chairs under a sign that reads pharmacy. He adds, “If we pull it off, people will be like, ‘How the hell did they do that?'” A tight schedule means long, exhausting days and very little sleep for the young star. But he doesn’t mind: “This will forever be one of the best experiences I’ve ever had.”

It almost never happened, though. Dylan has said that Ball initially thought his hair was “too MTV” for the role. It’s true—Dylan’s MTV ties run deep. He’s beloved to television audiences for his best-friend role as Stiles Stilinski on the network’s hit show Teen Wolf, recently renewed for a fifth season. But he’s not confined to the small screen. “I’ve always wanted to do action movies,” Dylan says. “I’m a huge Indiana Jones fan. And now I know firsthand that if a stunt coordinator offers you a pad to wear or land on, you take the pad. I throw my body around like a rag doll!”

His character, Thomas, is an ordinary teen who wakes up in a strange place, with no memory of who he is or how he got there. He’s surrounded by about 30 other boys (the Gladers), who learn to survive in a self-sustaining community while attempting to find a way out of the ever-changing and fatal maze that surrounds it. “In my mind, he’s the quintessential hero,” Dylan says. “Thomas discovers he has this courage inside of him that he learns how to access—it’s really fun to watch.”

The cast—who lives together in a local, no-frills extended-stay hotel—features a bevy of Young Hollywood’s brightest, including Kaya Scodelario, Will Poulter, Thomas Brodie-Sangster, and Ki Hong Lee. “We have a great vibe on our set,” Dylan says. “I host rehearsals outside my hotel room every night, and we’ll all run our scenes for the next day. I have a little buddy relationship with every single one of them.” But even with his penchant for over-preparedness, the actor didn’t have time to train for his Runner role. He’d finished shooting Teen Wolf in Los Angeles and, a week later, packed up and headed to Baton Rouge. “I worked with my stunt double for only a few days in preproduction,” he says. “But I felt it suited Thomas to not be in amazing shape.”

Dylan may be a newcomer to the action-movie scene, but he’s no stranger to mazes. Growing up in Springfield Township, New Jersey, he recalls visiting the Liberty Science Center in fifth grade and going through its Touch Tunnel. “It freaked me out so much,” he says. “You have to crawl through a pitch-black tunnel, and people would have random panic attacks. Mazes are crazy beasts.” Luckily he’s found a way to cope. “As an actor, I always feel protected in our maze, interestingly enough,” he says.

After graduating from Mira Costa High School in Manhattan Beach, California (he moved to Cali at age 12), Dylan considered pursuing sports broadcasting and eventually becoming a commentator for—or the general manager of—the Mets. (His bio on Twitter solely states: “long suffering Mets fan.”) “I ended up receiving a surprise scholarship for sports broadcasting from YouTube videos I’d posted,” he says. “It’s so crazy how I ended up acting.”

On the set in front of us, the crew arranges large props and places hay and dirt on the ground for the next take. In the scene, Thomas becomes a Runner—one of the few to go out into the maze when the doors open in the morning and return before the doors close at nightand battles larger-than-life Grievers (machinelike creatures that live in the maze and have a deadly sting). “I love sprinting,” Dylan says, “but I hate long-distance running. Isn’t that funny?”

The star, who values his privacy (he keeps his relationship with actress Britt Robertson, whom he met while filming the rom-com The First Time, under wraps), says he’s hopeful for a sequel and is very passionate about the movie, which he’s been chronicling on Twitter for the past year (“and I never tweet anything”). “I’m 22 and still think I’m young as an actor. I have so much to learn,” he says. A production assistant comes over, and in a flash Dylan’s back in the maze. Next stop: the Rubik’s Cube that is superstardom. I know he’ll navigate it extraordinarily.

Video: Go Behind the Scenes with Dylan O’Brien at His Teen Vogue Photo Shoot