First Photos of “The Maze Runner: The Scorch Trials” from People Mag

People Magazine have released the first stills from “The Maze Runner: The Scorch Trials!” Check them out by clicking the thumbnails below: 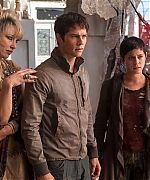 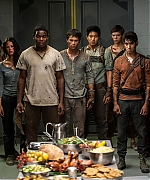 With plenty of fans, and more than $100 million in ticket sales, last year’s The Maze Runner was a certified hit.

The film, based on James Dashner’s young adult book series, dropped a group of unsuspecting boys into a mysterious maze, where they fought (sometimes each other) to escape.

The sequel, Maze Runner: The Scorch Trials, plans to blow away everything you thought you knew (unless, of course, you’ve read the books).

While “nothing can replace the maze,” says star Dylan O’Brien, who plays Thomas, they’re totally replacing the maze. The action this time centers on a lawless land called the Scorch, where the survivors try to gather more information about the WCKD, a powerful organization that’s in control of far more than they know.
Oh, and O’Brien, 23, tells PEOPLE that “there will be more female characters,” joining Kaya Scodelario, who in the first movie played Teresa, the only girl in the crew.

O’Brien is coy about divulging any more plot details, but he does promise answers for the questions raised in the original. With another two books in the series, he says, “our journey is not even close to being over.”

The Scorch Trials hits theaters Sept. 18, and check out Entertainment Weekly for more photos from the next installment of the Maze Runner trilogy.

First Photos of “The Maze Runner: The Scorch Trials” from EW