EW – It won’t be long now until Teen Wolf says its final farewell. And even though we know it will be an extended series finale, showrunner Jeff Davis says, “There were so many characters to wrap up. It was incredibly difficult [to write].”

It might not have been an easy process, but Davis is hopeful the ending will feel right. One thing he can promise? “It’s definitely not a cut-to-black [ending] like The Sopranos,” he says. “We tried to craft an ending that feels right for the audience and for the characters.”

More than anything, fans are anticipating the return of a number of characters, including Stiles, Derek, Kate, Jackson, and Ethan (who are now a couple, by the way). “It’s got all the characters back,” Davis says, adding, “Except for the ones who are unfortunately dead.”

Below, check out some exclusive photos from the series finale, including a few of those familiar faces. 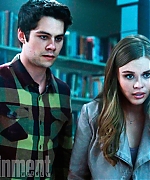